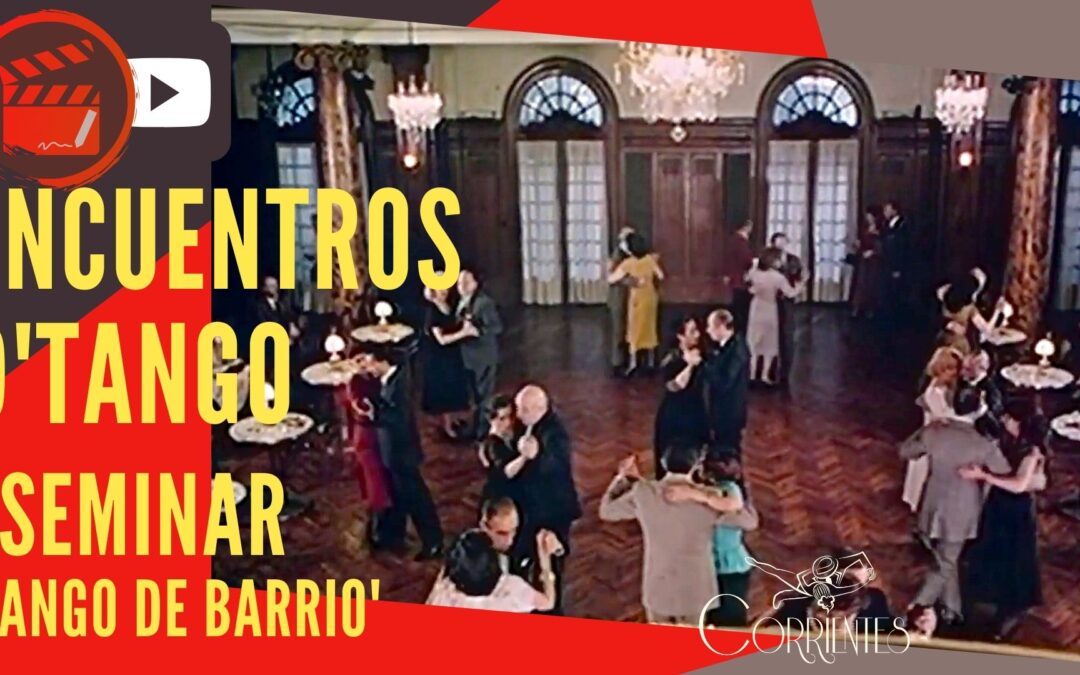 Mina and Giraldo present Encuentros D’ Tango, a special  Autumn Seminar to learn more about the history of Tango, its dance, music and cultural tradition. Tuesdays in Corrientes at Tufnell Park from 7 pm and Thursdays in Corrientes Orpington from 8 pm.

Wk 1/. Tango Vals I Pedro Mario Maffia, one of Tango’s greatest bandoneonists, gave us early valses (1931) providing us with the perfect music landscape to understand the simplicity of movement that flows in the 3/4 rhythm with subtle melodies and clear tempos. In this first part of the seminar we will revisit Gliding, pausing, syncopating in the Tango Vals.

Wk 2/. TangoVals II Francisco Canaro (1941) the evolution of vals in Tango took over two decades and at the pick of Tango’s golden era the music sounded larger, sophisticated, elaborated in complex arrangements. For the dancing crowd that meant more attention to accents and suspensions during the execution of steps in the  3/4 format. In this second part of the seminar, we will propose expansive circular patterns vs short quick time steps.

Wk 3 Tango De Salon -Villa Urquiza Style/Music with Lucio Demare. The barrio of Villa Urquiza has a long history of the development of tango, very well known during the Golden Age and certainly has had its representation in Villa Urquiza since the Tango Renaissance of the late 1980s and 90s. However, these characteristic stylistic variations have not been limited to this barrio, today the styles are mixed and it is difficult to divide Tango into various specific styles. However, for the purpose of the Encuentros D’ Tango Seminar, we will revisit the teachings from Tango Maestros (with whom Mina and Giraldo have trained for years) Carlitos y Rosita Perez. They have been running classes and milongas in Villa Urquiza, mostly at the great place that was known as Sunderland. Music will be by Orquesta Lucio Demare with the famous Tango ‘Solamente Ella’ (1944). Demare was at the front line of romantic songs, with great melody and subtle and intimate mood playing.

Wk 4 Tango Del Barrio. We continue the voyage across the 40s with Encuentros D’Tango Seminar. In week4 we will see part II of Tango de Salon focusing of specific signature figures and steps from ‘Tango del Barrio’, Tango from the suburbs. We will share our knowledge on how practicas enriched the vocabulary that gave major content to the Tango we know today as Tango de Salon. For Week 4 we will continue revisiting the teachings from Tango Maestros Carlitos y Rosita Perez. Music will be by Orquesta Lucio Demare with his famous Tango ‘Malena’ (1941, Lyrics by Homero Manzi).

Wk 5 Milonga Lisa with Orquesta Roberto Firpo, [email protected], Encuentros D’Tango Seminar travels back to 1930s when many milongas we enjoy today were created. At the forefront was Roberto Firpo, a great innovator, composer and pianist.

“Candombe of the candombes
for candombe
I give my love.
Negrito de los candombes
I give you candombe
if you love me”.

“The milonga is the living folkloric genre par excellence in my land (…) it is a rhythm that receives Afro influences and, by the way, it also comes from the folklore of the south of Spain, the Andalusian folklore, like a good part of our folklore. But it includes a vast area of the southern cone, the Argentinean pampas and the Uruguay”. . ( Alfredo Zitarrosa, radio interview, Madrid 1976) Alfredo Zitarrosa was the greatest exponent of the milonga genre in Uruguay. It coexisted with the habanera, but reigned in very humble social environments. For this reason, it has even been called the habanera of the poor.

Sebastian Piana, creator of the Milonga porteña (1931) said about the origins of the Milonga and its evolución from rural to a city rhythm: “Certainly. The habanera was almost the mother of tango. The milonga, on the other hand, belonged to country music, what today is known as folklore. Later the milonga arrived in town, but it was not yet that milonga of which I was the forerunner: it was a rural milonga, sung by gauchos, by that country people that, sometimes, improvised”.Fast-paced and energetic Milonga helped the emergence of Tango

“Since Milonga was one of the preferred dances in the poorer districts of large Argentine cities and rural areas, this music was usually performed using common instruments such as guitars, flutes, violins, pianos, harps, organ-grinders and even paper-combs and was danced everywhere from the specific dance gatherings to the clubs and street events. Same as tango, milonga was for many years viewed by the Argentine high society as the “dance of the poor ”.-© 2021 – Dance Facts

Entering the world of Argentine Tango goes far beyond sliding your feet across the dance floor carrying the music with every step and embracing your partner with every move. Although this is essential in the tango culture there is much more to discover.

Tango was born amidst encounters of different cultures, dance steps of various rhythms, musical sounds from three continents and people moving across rivers and seas to reach the port of Buenos Aires. The orchestras were born there, in the midst of this sprouting of new neighbourhoods, of musicians who brought their instruments in their suitcases, of Creoles who brought their own and of African slaves who never lost the sound of their drums and carried in their bodies the dances of their ancestors.

Tango was taking shape and presented itself to the world as it was, diverse, broad, open, a way of being and feeling that each person appropriates for himself/herself, there are no barriers, no titles of honour, only a tremendous desire to persevere in time, to invent and re-invent oneself. Tango is also walking on the old coloured tiles, the way one listens to what is sung, the life experience behind the lyrics, the stories of love, nostalgia and hope. It is history and dance, the past, present and future of a genre that was born 120 years ago and that refuses to disappear, on the contrary, every day it finds new frontiers to conquer.

No matter how old it is, what always remains of Tango are the steps clinging to the floor intermingling between melodies and rhythms that once were born of Habaneras, African Candombes and the sounds of old Europe, of that migration in tumult that disembarked in La Boca bringing the Polka, the Mazurca and the Andalusian Tango. Decade after decade, Tango was growing in a poetic social and collective ebullition of great dancers and maestros, men and women, who created and recreated steps from the past and invented others for the future: ochos, quebradas, media lunas, calesitas, firuletes, apilados, ganchos, barridas but above all it is walking with cadence, joining the bodies to the music of each orchestra and with it dancing and sounding different in each tanda, because each orchestra tells a part of the history of Tango that was born to be danced, dreamed, suffered, loved and never forgotten.

For more information and bookings https://corrientessocialclub.co.uk/product/tango-tufnell-park/