Jazz and Tango – partners or rivals? 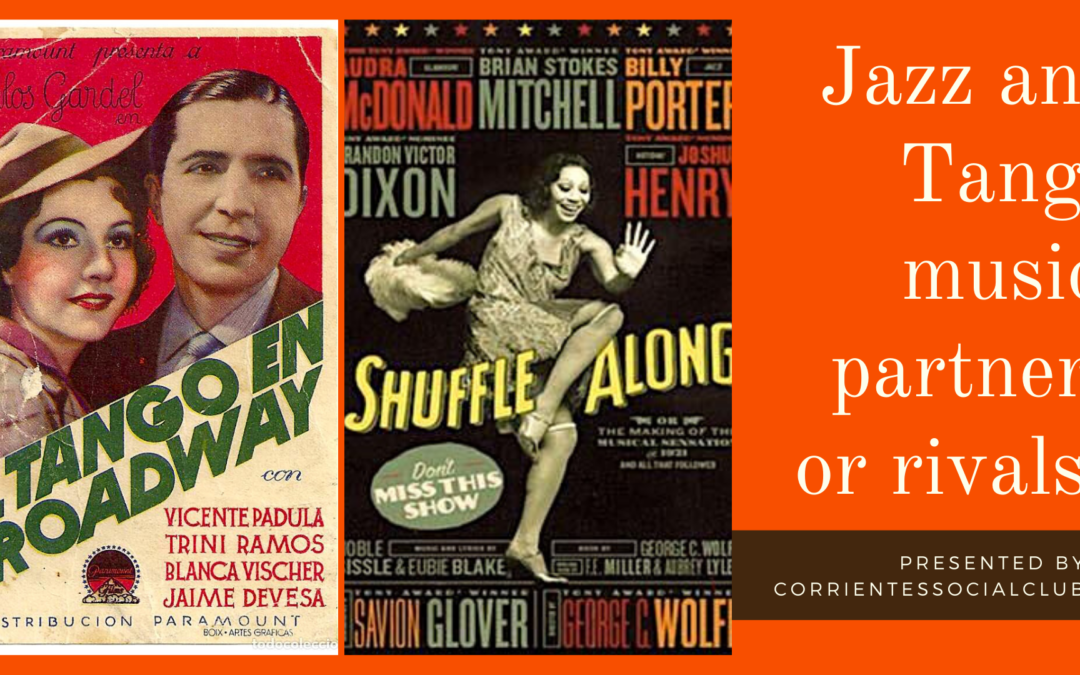 As Tango fans we have probably noticed that some Tango band recorded Foxtrot and if we have travelled to Buenos Aires we would have noticed perhaps that some milongas play ‘jazz’ as cortinas, why, how and when Jazz encountered the Tango or was the Tango that encountered Jazz?

Jazz and Tango – partners or rivals?

From the First World War onwards both tango and jazz were globalized by the entertainment and record industry. In North America the bourgeoisie of New York sought an appropriate cultural repertoire turning to European aristocratic culture. In that context, the fashion of tango arrived in the United States in the early years of the twentieth century again based on the European cultural model. It is around this time that Broadway became the centre of New York’s nightlife, entertainment entrepreneurs emerged who quickly became cultural mediators, trading with the new leisure industry.

Controversies, prohibitions, crime and social scandal were also key elements of this new wave of modern and urban dances that reached the main metropolises of the United States. By the beginning of the 1920s the Prohibitionist Movement had identified a cultural clash: the liberal, progressive and integrating wing against a traditional and fundamentalist religious vision. The latter was opposed to everything that represented a broad cultural movement that in many cases was linked to jazz, integration and the excesses of the ‘crazy years’.

The United States had brought about a new trend in musical cultural circles. It exported Broadway jazz to Europe, and this caused great upheaval. Not only did it stop looking sideways at what was happening in the big European capitals, but this unique rhythm, with black roots, took a place in the dance scene. This fusion of jazz took place in a context in which the music and dance market was already well served. For this reason American black music had to create a place for itself and displace other rhythms and imitators.

In turn, the dissemination of vinyl records and live music served to represent Buenos Aires music on American stages. In the mid-1910s, various newspapers advertised the sale of albums released by Victor Company and Columbia Records that included Argentine Tango. Both Jazz and Tango were contemporaries. They were children of the new era of desires for freedom and the search for a vernacular identity. Two decades later there would be a kind of rivalry that more than in music was evidenced in the dance:

“natural grace used in good tango has a certain feline character that makes it not only beautiful to see but to be practised in contrast to the abruptness of swing movements.”

In the international arena both genres were either equally acclaimed, prohibited or rejected.  Both genres celebrated success in musicals in Germany. But despite this, in 1932, surprisingly at a meeting of dance instructors it was agreed to prohibit all non-Germanic folk dances. That led to tango and the fox-trot leaving the public stages.

The Victor Record Company and the massive export of tango through radio and cinema.

Tango had conquered New York and between 1913 and 1915 one could see advertisements in which tango tea, tango lessons and dances were promoted. The New York Times announced tango tea in places such as: The Republic, Rivoli, Broadway Silver, St Regis’Hotel, BF Keith’s Palace, Majestic, Claridge Hotel, Park Avenue Club, The Country Club, The Marlborough House, Ziegfeld Follies, Hippodrome, Madison Square among others. The success of the dance was linked to the business commitment of the nascent recording companies. Among them one of the most powerful, Victor Record Company, travelled to Buenos Aires in 1907, to make the first recording tests.  Argentina was the first country in South America to which they arrived. 424 recordings were made and after four months they returned to the United States. By 1906, in the recording studios of the Victor Company in the United States, versions of El Choclo, La Morocha and El Porteñito were recorded, all by Ángel Villoldo.  By 1912, Victor’s catalog included an extensive series of songs cut for Argentina with tangos like Aflojá un poco, Che , El Entrerriano , El Porteñito , La Morocha  amongst others.

The rise of Tango music, song and dance on American stages starring the great Gardel who made a powerful impression with his performances of authentic tango in the movies with the films Melodía de Arrabal, Cuesta Abajo and El Tango on Broadway. Let’s not forget that Fresedo, Cobian, Firpo, Canaro, were also part of the long list of Tangueros who sought fame in North America. There were also the dancers (after the success of the film The Four Horsemen of the Apocalypse in which Rodolfo Valentino, dressed as a gaucho improvised an Argentine tango ) such as: El Cachafaz, Casimiro Ain, Ernesto Bianchi, María Canaro, Medrano and Donna, Veloz and Yolanda among others.

The fightback of jazz music

Both Tango and Jazz are symbols of a deep and complex interaction of how the primitive and the modern coincide in the avant-garde cultural construction. The origins of jazz dance and its development go back to traditional African movements. Africans had to find ways to adapt to their new environments and lifestyle. But they also wanted to retain their native traditions. Dance was the only way to achieve this.

In the end, the blending of African body movements, coupled with the European formal dances, produced a new form of dancing to create the Afro-American vernacular. In the 1920s The foxtrot was developed in the United States and is thought to have been developed in African American nightclubs before being popularized by the famous dance couple, Vernon and Irene Castle.

In turn, foxtrot and swing arrived with impressive force in the ballrooms and the locals enjoyed rag-time and jazz, which had a black origin with exclusion and poverty so similar to that of Buenos Aires music. Although in many stages it was played by orchestras of white musicians.

In Buenos Aires, one of the most admired was that of Paul Whiteman known as “The King of Jazz.” The first significant event where the two rhythms were integrated was when the newly created Avenida 9 de Julio became an attractive dance floor very well lit to the delight of foxtrot and tango enthusiasts.

The second happened when in 1929 Josephine Baker performed in Buenos Aires, there was a revitalization of the “American” dances, as they reproduced the stereotype of Yankee modernity. Already by the 1930s knowledge of jazz increased, and swing became synonymous with big band music.

Jazz orchestras lived harmoniously with those of tango, as if their roles were complementary. Jazz used to be danced as a break from tango, in a relaxed style, although there were things to learn here: dance manuals brought graphics about the foxtrot, which was danced “to the little skips”, in contrast to the grounded rhythm of tango . By the 1940s Foxtrot was the most popular fast dance on many dance halls in United States, Europe, South America and beyond. 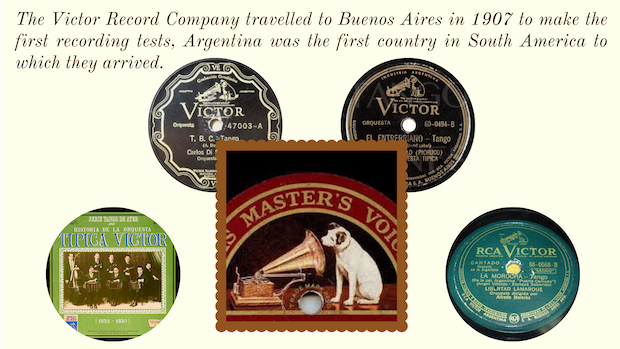 The Victor Record Company travelled to Buenos Aires in 1907, over 100 Tango bands recorded albums for this label.

The competition between the orchestras of tango vs jazz did happen, although some found a way to play both genres.  In order to protect tango music production and avoid it being displaced by the jazz orchestras many typical tango orchestras incorporated Tango-Fox Trot and jazz sets in their repertoire.

This process was experienced by many important orchestras such as those of Canaro, Filiberto, Lomuto, Fresedo, Cobian, Julio de Caro, Donato and of course the Victor Typical Orchestra.

However, these genres that were parallel and with many similarities both in their gestation and in their stage of globalization learnt to co-exist. In Astor Piazolla the final answer was found, a dialogue, another hybrid that came alive in his work and turned him into of one of the great musical geniuses that Argentina gave to the world.